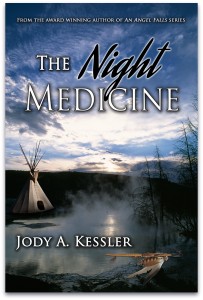 In 2012, Blackfoot tribal member, Dean Wolfsblood, is the reluctant guardian of a centuries old medicine pipe that makes time travel possible. When Dean’s former Marine buddy, Badger Lowell, bribes him to take the arduous trip into the past, the last thing either of them expects during the “Night Medicine” ceremony is for an intruding grizzly bear to chase Kai, a beautiful and complicated Cree woman, into the past with them.

Upon arrival in 1868, the three unlikely companions discover deceit, murder, buffalo hunters, and a kidnapping waiting for them as they travel across mountains and plains to the gold mining town of Helena, Montana. As hidden motivations are exposed, secrets are revealed, and all well-meaning plans for their journey are cast away into the winds of time. Can they survive history and each other long enough to make it back, or will the past change their futures forever?

What readers are saying:

***** 5 Stars – “I couldn’t put this book down once I started. The author creatively weaves the romantic and the metaphysical in with the rich but tragic history of the Blackfoot and Cree, to create a novel that is absolutely spellbinding!” – Amazon Reviewer

***** 5 Stars – “So very well written. This 1868 time travel story is entrancing. What a great fresh perspective of an area seldom written of. I hope to see more, and soon, from this great story teller.” – Amazon Reviewer

An excerpt from the novel

Disoriented, Dean watched as Kai dropped the pipe’s stem and placed protective arms in front of her body. She wasn’t completely naked. She wore a T-shirt and white socks, but her pants, underwear, and shoes were gone, as history hadn’t yet discovered synthetic materials.

Backing away from the others, Kai stumbled over an unseen log and landed hard on her rear end with a shriek.

“Look,” Badger said, and pointed at the empty space where the shack should have been.

“We did it,” Dean said definitively.

Dean was aware of the panic in Kai’s voice, but also acknowledged her attempt to suppress it. He stared at the empty space where the old hut would be built sometime in the future, instead of at a half-dressed Kai. He was fairly certain their journey was over. Or just beginning, depending on how he wanted to think of it. He needed a minute to let the truth sink in, but it was a minute he didn’t have. He swung his leather pack off of his back and set it down at his feet, reassured that it had also made the trip. His supplies gave him a small sense of security. What triggered his insecurity was scrambling to her feet while trying to hide her bare backside.

“Send her back before she gets us killed,” Badger muttered as he set his own pack next to Dean’s.

“Send me back?” Kai asked. “What’s that supposed to mean? Back to where?”

Dean heard her buried hysteria rising with the tone of her voice. He decided a calm approach would be the best way to handle things.

“That’s not going to happen,” Dean said to Badger. “Give her your extra pants.”

“Give her yours,” he snapped back.

“Mine will be too big. You’re closer in size. Just do it. Shoes, too. How would you feel if your ding-dong was hanging out in front of her?”

“Proud,” Badger answered, but he tossed the clothes over to Kai. “I want those back,” he warned.

She slipped on the pants and shoes and walked up to Dean as he squatted down to start a campfire, much like the one they had just been burning in 2012. He thought it was even in the exact same spot. He had a second to marvel at the thought of a century and a half-old fire ring, before he felt his ear being pinched.

He swatted at her hand, and then promptly tipped over from trying to get away from the pain. He caught himself before falling into the grass and forest debris.

“Hands off, woman,” he said as his ear flared with stinging pain.

She glared at the pipe bundle sitting on top of his pack.

“Explain everything. Right now!” she ordered.

Dean righted his body and continued to start the fire. He placed a lit match to some dry pine needles and punk wood and blew gently, staying focused so as to not waste a single precious match.

“Settle yourself for two seconds, would you? We’ll be here for the rest of the night, and we need a fire.”

He wouldn’t look up at her, knowing the futility of his words. He could all but see the angry fumes oozing out of her.

“This is a disappointment, Wolfsblood. She’s a complication we didn’t plan for.”

Kai turned on Badger. “Shut up, you stupid pig. What did you do to my clothes? Where is the bear?”

“Can we just put her out of her misery and save us some trouble?” Badger mumbled, more to himself than to Dean.

Dean didn’t want to get in the middle of these two, but how could he avoid it? They were standing there because of him.