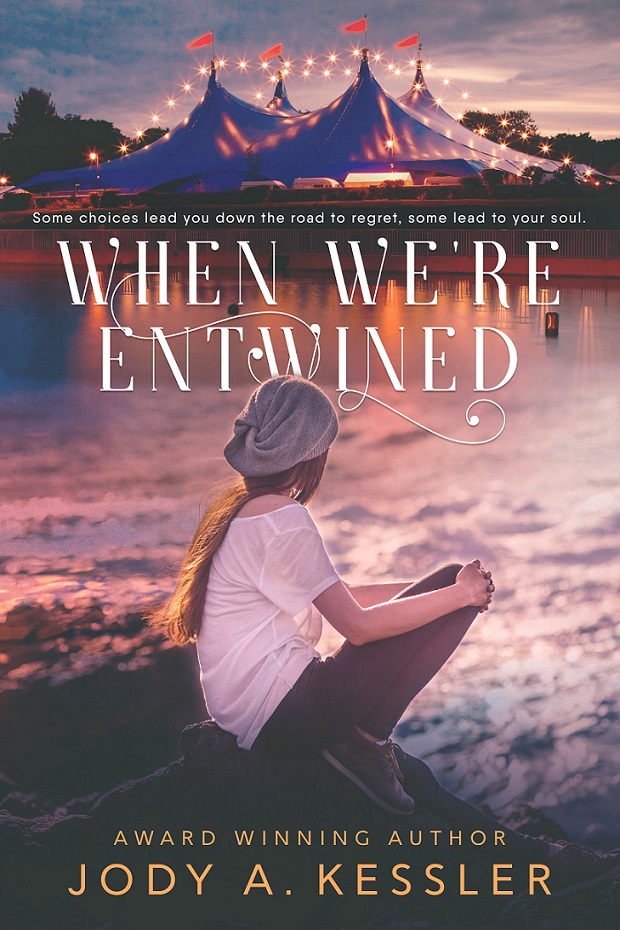 “Do not judge me for where I stand today, until you know how far I’ve traveled to get here.” ~ J. Pyrah, When We’re Entwined

Former circus performer and aerial gymnast, Tara knows it’s time to move on. Tired of the constant abuse and the emotional rollercoaster ride at home, she takes to the road to perform on stage with her boyfriend and his band, Paradox 21.

Tara never imagined late night after-parties would lead to a devastating betrayal by her boyfriend and cause her summer tour to come to an abrupt end. Jobless, homeless, and broke in a city far from home, an eccentric homeless knight gives Tara fresh perspective and a serendipitous run-in with an old acquaintance—a punk named Corban—takes her on a spontaneous road trip that lands her a job with a traveling sideshow.

As Tara searches for a freedom she has never known, she documents her journey by writing her most embarrassing, profound, excruciating, and soul-searching moments in letters to her sister. Despite heartache, love and loss, Tara finds immeasurable strength and wisdom during her travels in this unforgettable adventure of self-discovery.

“When We’re Entwined is a gripping, emotional modern-day adventure with a glimpse of alternative lifestyles in America as one vibrant, young aerial gymnast realizes cruelty and injustice can be outweighed by kindness, humor, and compassion with the help of a most unlikely and wildly colorful cast of characters.”

Trailer for When We’re Entwined

Read an Excerpt from the Novel

Desperation is a wholly conscious nightmare. It grips me like a stone ogre engrossed in ripping my hair out. She sits on my chest throttling me with hairy-clawed mitts while breathing putrid stink breath in my face. This emotional beast isn’t going to let me breathe untainted air while I suffer for days over my inadequacies and failings.

I’m leaving home with my backpack on, dragging a duffle bag full of doubt and crooked memories. The knife of guilt stabs my gut for running away. I should feel worse about leaving Evie and Jonah, instead of Ollie, but my dog needs me. I need her—and I can’t take her with me. Evie will be all right. She always is. At least, it’s what I keep telling myself. Otherwise, I wouldn’t be able to abandon my sister. Jonah is too little to understand what it’s like to be a nineteen-year-old. Ollie is already living down the street at a neighbor’s house.

Her kid arms are so thin. That doesn’t mean she’s a wimp. Evie is strong. She has way more strength than I do. Evie can hold up the Statue of Liberty in a hurricane. She grips me like she’s clinging to the edge of the world. A piece of my humanity shatters when I make her let go.

I’m breaking something that I can’t fix. It’s trust, but there’s probably a long list of sacred sisterhood principles being flushed down the drain as I make my way to the door. I dismiss the feelings like irrelevant background noise. Not that Evie is irrelevant or that she won’t ever trust me again, but I can’t trust myself not to hurt someone who I love more than anyone else in the world. If I can’t trust myself, then I can never forgive myself either.

She tugs my shirt.

“I love you too, Evie,” I tell her as I spin around and press her twelve-year-old body against my heart for a final hug.

She’s an amazing person. How can one little girl be the epitome of perfection? I’m sure she has a direct connection to goodness. To the source of all life. “You have to stay with Jonah and make sure he does his homework and stops picking his nose.” I try to smile, but it’s strained. My little brother does much worse things than dig for boogers, but it really grosses Evie out.

“Why is Geoff so mean to you? I’ll make him stop. Or Mom will. I know if you just told her, she would make him stop ragging on you all the time.”

Tears start to choke her words. I close an emotional floodgate to hold my own back. We’ve gone over the injustice in our household like reruns on the television. The same episode plays again and again, and we keep watching the channel, expecting something different, but it never changes. Geoff treats me worse than my siblings. There’s no known reason for it. At least a rational reason that makes a scrap of sense. I secretly think I figured it out, but Evie doesn’t need to know.

At one point, about two years after my mom met Geoff, I thought he hated me because I was older and I could express myself more clearly than my younger sister could. But Geoff resents me because I make him see himself as the jerk he is. I gave up picking apart every detail of why my mother’s husband despises me so much. Geoff is a ginormous prick with an obsession for health food, a ridiculous goatee, and an iron fist.

Evie sees the differences in our family dynamics with unique clarity. Mom? Only what she wants to, which isn’t much better than walking around wearing a blindfold. I often imagine my mother living in some tainted Wonderland we’re not allowed to visit. This place only exists in her head, so it’s not actually accessible to anyone else. She rarely leaves this delusion, so it’s been up to me to make sure the rest of us reside in reality. I guess what I’m saying is Mom pretends nothing is ever wrong. She’s even told me Geoff is helping me become a better performer. That he’s pushing me to be my best like her father did to her. How does she not understand that abusing a kid isn’t an acceptable way to “train” someone? There’s so much wrong with that sentence; I can only duck my head to avoid any more bullets and walk out the door. That’s what I’m doing now.

Let me backtrack to give you a brief summary of living with Geoff and my mom, Autumn.

I grew up with the Farinelli World Circus. Mom used to train Evie and me when we traveled nine months out of the year in the performing arts business. In other words, we’re acrobats, gymnasts, and dancers. Evie and I? We are the upcoming generation in a long line of circus performers. And these days, you have to be multi-talented to impress a live audience. Anyone can simply open the internet and watch amazing people doing extraordinary things, so live acts better be spectacular. It’s a lot to live up to. My mother is a graceful and talented artist. Geoff may be good on the trampolines and the pole acts, but I’d never admit it to him. His attitude and general personality cloud my vision, so all I ever see is a controlling, judgmental, jerk-off doing back flips or showing off his muscles.

After my father had left, Mom’s life fell apart, and Geoff walked in to pick up her pieces. Only he didn’t glue them back together correctly. Mom let Geoff take over everything including our practice sessions. He eventually moved us away from our traveling lifestyle and into the cruddy rundown house that used to belong to his recently deceased father. My mom went along with Geoff’s new life plan and the further we were from The Show and her life of continual travel the more she disappeared into herself. It gets worse every year.

You see, Geoff and my mom were reaching an age where their experience in show business made them valuable to the team, but their bodies were becoming a nagging burden. My mom wasn’t ready to quit, but the younger performers were rising every season, and my mom kept being used as an alternate. I think Geoff wasn’t ready to retire either, but they hooked up, had Jonah, and our trailer was getting cramped. Then Geoff’s dad died. Geoff inherited the dumpy house in the midst of a seventies tract home neighborhood in Crapville, USA. His other major gain from the parting of his father was a liquor store that also happens to sell chips, candy, soda, and cigarettes. We left the show circuit and moved to desert hell. Mom and Geoff made us continue practicing our “talents” by converting the backyard and the garage into a training facility for the unbalanced. I’m not mentally disturbed, and neither is Evie, but who in their right mind practices aerial silks and low wire in the desert heat? I made it a part-time job pointing out this absurdity and refused to practice if it was above eighty-five degrees, regardless of the shade canopies they put in place. Geoff was quick to find a solution to my valid complaints and started making us practice at stupid-o’clock in the morning and sometimes in the middle of the night, too.

When I told them I didn’t care about ever going back to The Show, Geoff would say things to me like, “If you could keep your damn legs closed and practice more, then you might be good enough to audition for the next season.” He completely missed my point.

Other days he would even inform me, with a thoughtful look on his asshole-driven face, “You’ll never make it as a professional. You’ll be lucky if anyone hires you to scrub the piss off the toilets.”

Mom never seemed to hear these comments. Evie, of course, heard everything. Geoff didn’t care if his remarks were overheard. He understood Evie didn’t have the power to kick him out or make him stop being a controlling bastard.

Evie excelled at everything she tried. If for some reason, she slipped or couldn’t master a new technique, she would cry silently, brush away her tears or take a break, and be back at it with no nasty insults or degrading remarks from our stepfather.

Growing up with Autumn and Geoff Holsteen as parents was about as fun as drowning in Jell-O. There were moments of sweet jiggly goodness, but mostly I could never stand on such an unstable foundation.

A vehicle pulls up in front of the house, and I peer over Evie’s shoulder out the window. My boyfriend, Keel, is parked at the curb.

“It’s too late, Evie. I’m done with school, and I can’t stay here any longer. Geoff is always better to you, so you’re going to be fine. I’ll call you soon. If anything changes and he starts being mean to you or Jonah, you just have to tell me.”

“Then I’ll say anything you want, just don’t leave.”

She’s really crying now. The choking sobs make it hard to understand what she’s saying. I squeeze her tighter for a second that is an eternity too short and slip out of her arms. She covers her face with her hands, and her body shakes as she bawls her eyes out. The sound of tears crashing to the floor and cracking the ground we live on almost tips me over.

What am I doing? I glance out the window and yearn for my freedom. My boyfriend’s truck is the escape I’ve been waiting for. Keel offered to let me join him and his band on their first tour this summer. The backpack suddenly feels like a protective shell on my back. The straps are digging into my shoulders, but the discomfort is inconsequential compared to the guilt dividing me into two battling halves. I want to stay and protect my siblings, but I have to get out of the house before Geoff and Mom return.

“I’ll call you soon,” I say again, picking up the rest of my life and hauling it out the door.